August 1st 2017: The New Energy Labelling Regulation has officially entered into force. The regulation was published on July 28th in the EU Official journal. The transition to the new label will be slow and may cause confusion for consumers during the overlap period over several years. The product database, providing an overview of products in the EU, is expected in 2019. Labels will not include the “+” anymore and return to a A to G scale with a rescale trigger mechanism guanranteeing the effectiveness of the label.

Briefing by ECOS, June 13th 2017: ECOS views on the final compromise for the revision of Energy Labelling rules for energy-using products

March 21st: the European Parliament and Council have agreed on new framework regulation for the Energy Label: Labels will be better understandable thanks to a clear A-G scale, and a product database will provide a better overview on the market. The regulation will be published in the OJ and enter into force in September 2017.

Press release by Coolproducts, March 22nd: New energy label must be introduced quickly to slash energy use and household bills

In its 'winter package' published on November 30, the European Commission proposes a binding energy efficiency improvement of 30% compared to 1990, which would replace the current non-binding target of 27%. The Commission presentation on November 30 also included the long-awaited Ecodesign work plan 2016 - 2017.

'EU champions 'people power' but the devil lies in the details': analysis by Euractiv, December 1st

Blogs by Coolproducts, ECOS and Greenpeace

The Commission has updated its infographics on Ecodesign and Energy Labelling: the energy efficiency measures save each household € 490 on energy bills per year, help the EU considerably to meet its energy saving and emission reduction goals for 2020, create annual revenues of € 55 billion and reduce the need to import energy.

Despite all these evidence-based benefits, fears over bad press have guided the discussions on the Ecodesign Work Plan 3 (2015 - 2017): the Commission has deleted hair dryers, hot drinks vending machines and toasters from the list of potential future Ecodesign measures.

The US-based Natural Resource Defence Council (NRDC) has tested several TV models by altering conditions and settings of the standard test procedure that is used for the energy declaration. The results show that models of the three best selling US brands can double their energy consumption when their settings are changed or a video different from the standard test video is played. It seems that the 'real world' energy consumption by these TVs is higher than declared, and consumers are faced with higher energy bills than expected.

European NGOs have launched similar tests with EU products. Tests with TVs, refrigerators and dishwashers will reveal if test standards reflect real world usage or if products may consume more when exposed to conditiones different from test standard conditions.

TVs may be consuming $1.2 billion more energy than expected: Blog by the NRDC, 21. September 2016

Is your TV using twice as much power as advertised? Coolproducts Blog, 21. September 2016

Announcing an investigation into the home appliance industry on the anniversary of Dieselgate. Coolproducts Blog, 18. September 2016

The overall goal of this activity is to contribute to the efforts of market surveillance – to ensure that the information provided on the energy label is correct, and that the retailers provide the energy labels and the product fiche to consumers in the prescribed form. These activities were performed under the Horizon 2020 project Topten ACT.

The activities within this task have been performed by the Topten Partners in the following three ways: 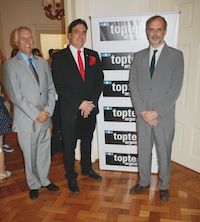 Vida Silvestre has launched Topten Argentina. After Chile, there are now two Topten teams in latin America selecting and showing the most efficient products.

Topten Argentina has been officially launched in the Swiss embassy in Bueno Aires on December 16th 2015: Daniel Redondo, Energy Planning Secretary from the Energy and Mining Ministry of Argentina; Hans Peter Mock, Ambassador of Switzerland in Argentina and Carlos Tanides, coordinator for the Energy Program in Vida Silvestre.

Find here the press release by Vida Silvestre about the Topten launch.

Following the news about 'VW-gate' Topten suppresses dubious car models from its lists: all models from VW, Audi, Seat and Skoda with Euro5 Diesel motor are deleted.

More information in a telegraph article from October 2nd.


The European Commission has published its market assessment of directional lamps, showing that efficient LED spot lamps are available, affordable, equivalent in terms of functionality and compatible with equipment used between the mains and the lamp. Consequently, the requirements for the implementation of stage 3 of Ecodesign regulation No. 1194/2012 are met. Stage 3 will leave only efficient spot lamps on the market after September 2016 - basically LED spots.

On 15th July 2015 the European Commission has published its proposal for the revised Energy Labelling Directive. Topten welcomes the main changes:

The Intelligent Energy Europe (IEE) project 'Yearly Appliance Energy Cost Indication' (YAECI) has made the running costs of products transparent to consumers at the point of sale, together with retailers in 9 EU countires. As a result, retailers saw an increase in sale of energy efficient products (A++, A+++). Main conclusions from the YAECI project include the need for a mandatory product registration and a respective database. More information:

The EU postpones the ban of inefficient halogen lamps, which has been announced since six years, and misses energy savings of around 33 TWh in ten years. On 17th April Member States agreed to the Commission proposal to postpone stage 6 of the lamps Ecodesign regulations, banning classes C and less efficient, to 2018, despite the fact that efficient LED lamps are better and less expensive than expected. Inefficient lamps of classes C, D and E now remain on the market until September 2018. LED lamps are 80% more energy efficient than those least efficient lamps, and each LED lamp saves consumers EUR 60 over its lifetime of 15 years compared to a standard halogen lamp. More information:

Horizon 2020 is a large research and innovation programme by the European Union. Horizon 2020 will fund two Topten projects from 2015 - 2018:

Topten ACT will select and present the most energy efficient products on Topten Websites in 16 countries in Europe, enabling consumers to act by making energy saving purchasing choices.

The updated Air conditioner lists lists on Topten.eu show that the efficiency of these products has improved impressively. The new Energy Label with classes up to A+++ (regulation No 626/2011) has been compulsory since January 2013. Since then a seasonal efficiency is applied for air conditioners - no longer discouraging efficient part load running. The Topten lists shows some innovations by March 2014:

The European Commission has been working hard: eight new Ecodesign and Labelling regulations have been published in the last few months:

Topten presentations at the EEDAL conference in Coimbra, September 2013:

ATLETE II evaluates energy labeling and ecodesign of washing machines. For the first time in the EU, models will be tested under the new Energy Labeling regulations. The tests of 50 models have now been taken up.

On February 27th the Regulatory Committee has approved the proposed Ecodesign regulation for vacuum cleaners with a few changes. The most important requirement is the power cap, limiting the power of future vacuum cleaners to 1600W in tier 1 (after Sep 2014) and to 900W in tier 2 (Sep 2017). Apart from that, the regulation also defines minimum requirements for the performance (dust pickup) and the annual energy consumption, in tier 2 additionally on dust re-emission, sound power level and durability.

The Ecodesign regulation is now undergoing a 3-months scrutiny by the European Parliament and the Council. The Energy Labelling regulation for vacuum cleaners is expected to be adopted by the Commission before the end of this period.

On February 18 the Commission has adopted the energy labelling regulations for space and combi heaters and for water heaters - after five years of discussions. The energy labels will apply starting in 2015. One label applies for all technologies of boilers - a key aspect for a comprehensive energy label.

In March 2013 the ecodesign regulations for space and water heaters will be voted on. Combined with the energy label, these regulations are expected to lead to annual energy savings of 1900 petajoules, equivalent to about 110 million tonnes of CO2 emissions by 2020.

The Ecodesign regulation for tumble driers has been adopted by the European Commission on October 3rd. It will ban the worst performing driers starting in November 2013.

Corrigendum to the labelling regulaiton on driers, March 2012

Analysis of comprehensive sales data from Switzerland shows that appropriate policy instruments are key to drive the technical development of products. In order to regularly and timely re-define energy labels and minimum efficiency requirements in parallel with the product development, the European Union need a systematic market monitoring, based on recent and exhaustive sales data.

The Commission has adopted the new new energy label for driers in early March 2012. The labelling regulation is now scrutinised for two months by the Parliament. Ecodesign measures are also proposed: the draft ecodesign regulation will be voted on by the Regulatory Committee in early May. Topten recommends to define more ambitious minimum requirements than proposed: in tier 2 only heat pump tumble driers should remain on the market.

The Commission proposes an energy label and minimum energy performance standards (MEPS) for professional refrigeration cabinets (Decmber 2011). Topten welcomes the measures and looked at the proposal using data available. Findings: both the label class limits and the MEPS should be more stringent. Otherwise the measures will not lead to the expected energy savings.

Three more countries have entered the Topten game! The game 'Be the top energy saver' aims at actively engaging people on energy efficiency by

The winner of the game receives an energy efficient prize. By now the game is online on

Topten of the Czech Republic

The Topten team was present with presentations on the following seven papers:

The European Commission has officially adopted the new energy labal for air conditioners on 4. May 2011. The Parliament and Council now have two months to accept or reject the proposal. Topten welcomes the new label, even though it regrets the low class limits and the privilege of single and double ducts.

Current EC drafts of the labelling and ecodesign regulations: env-ngo-network.de

The winner of the game receives an energy efficient prize. Currently the game is online on

Topten of the Czech Republic

On December 20. the recently adopted labelling regulations have been put into force. The new energy labels for refrigerators and freezers, washing machines and dishwashers will coexist with the old labels in 2011 before the new schemes become mandatory in December 2011. The first energy label for TVs will also be mandatory from December 2011.

November 2010: ecodesign regulations for washing machines and dishwashers are adopted:

September 2010: information on the Commission proposal for the new energy label for TVs and the energy label revision for refrigerators and freezers, washing machines and dishwashers:

May 2010: More information on the adoption of the new energy label directive:

November 2009: Previous information on the proposal of the new energy label format: